Gudule shoots for the moon

or how biodynamic agriculture helps us keep our feet on the ground. 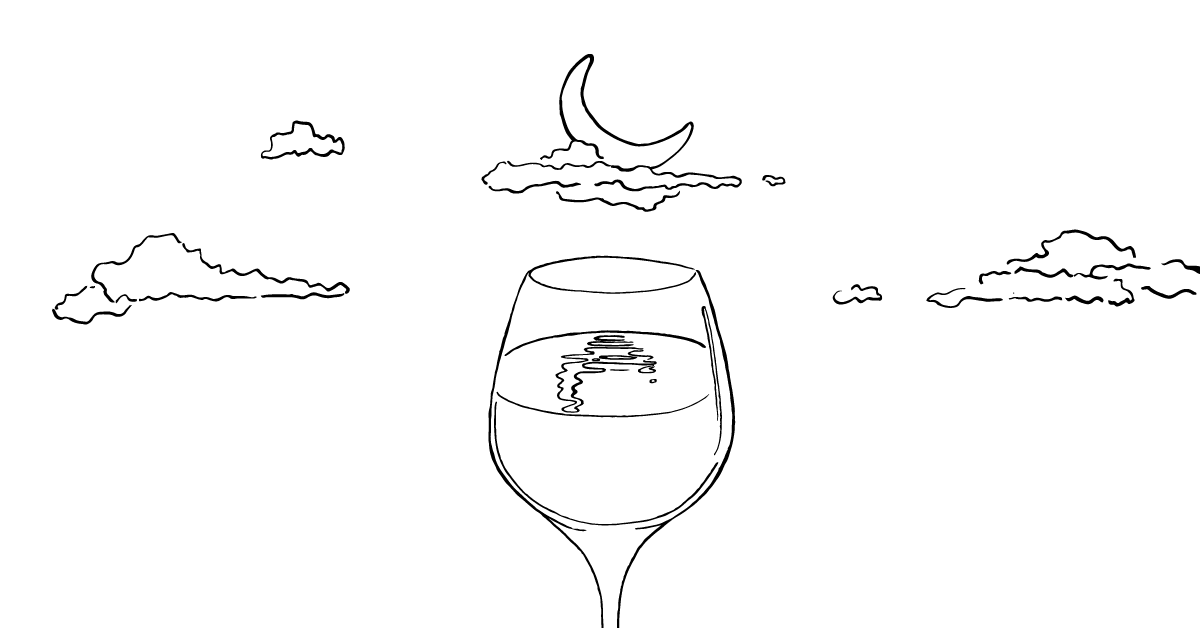 It was in 1969, just 50 years ago, that man first set foot on the moon. Out there in the immensity of space, Earth must have looked very small and fragile.

Forty years earlier, a man, Rudolph Steiner had noticed the same thing. He was a philosopher and scientist who laid the foundations for what we now call biodynamic agriculture, an approach that sees the Earth as a whole, living in sync with interacting matter, plants and animals.

Regarded for many years, and still by some today, as a rather eccentric discipline, the results of biodynamic agriculture cannot be denied. Here in the land that is regenerating. Here in the grapes that gorge themselves on natural soil. Here in the wine that tells the story of respect for its terroir. Here in the meticulous work of the wine-grower.

Here in our cellar, it is the lunar calendar that sets the pace for the different stages of the wine-making process. A biodynamic approach that helps establish the perfect conditions when the stars align (magnetic fields etc.). It is a constraint that we have imposed on ourselves not because of folklore, but because others who have gone before us have noticed the benefits (try a Romanée-Conti if you want proof!).

Our wine isn’t one for the enlightened few, but we hope that it will light up your table like the lantern of our patron saint, who also no doubt sought help from the Moon to find her way home. Home to the land that our cellar strives to introduce to the world by maintaining the characteristics of each terroir that contributes to its wines.

If you want to find out more about our outlook on biodynamic agriculture, visit https://www.bio-dynamie.org/

Gudule is getting on her bike 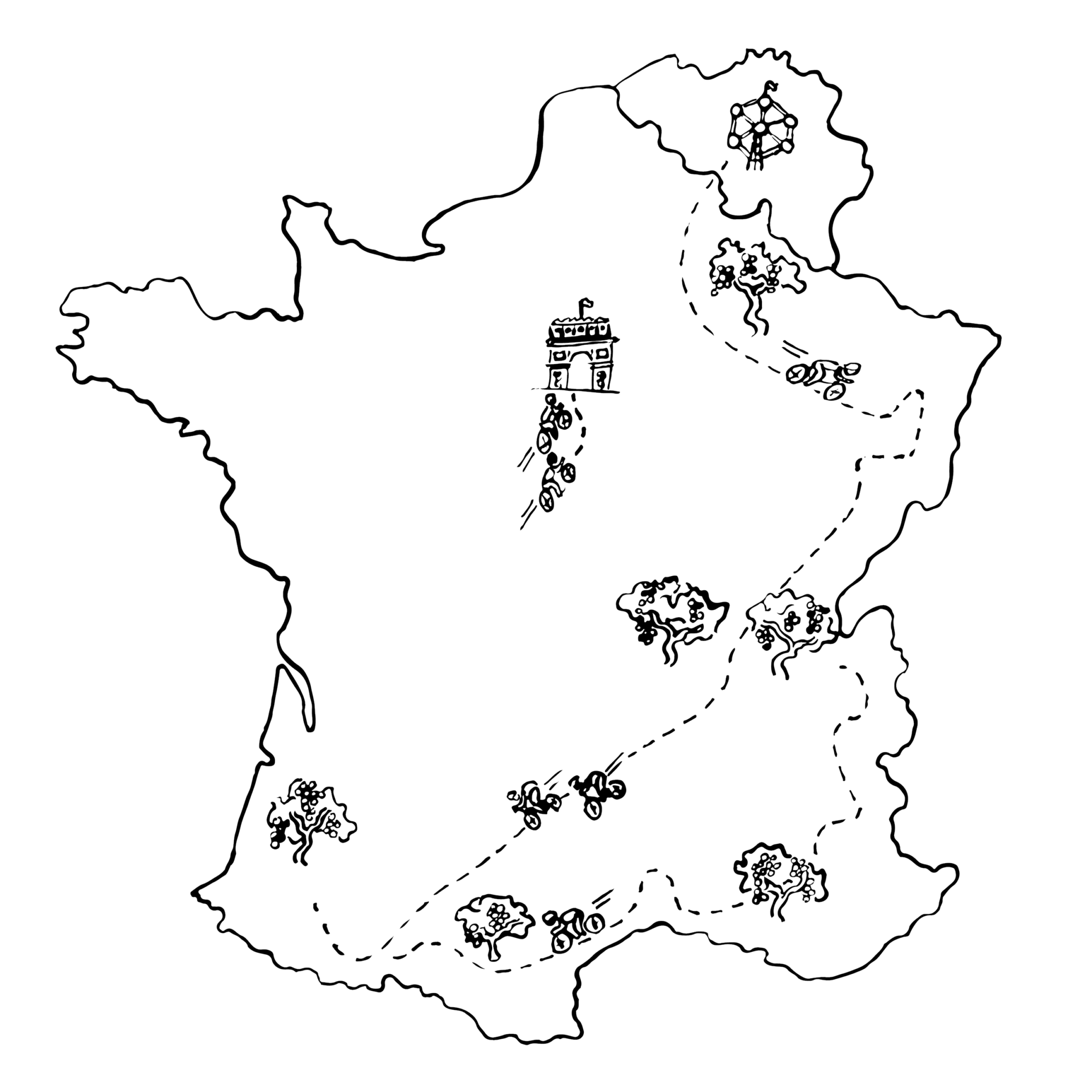 There will be traffic jams at the start line.

No doubt this will have escaped no-one’s notice, but this year the great Tour is starting in Brussels. The city will adorn itself with tricolor pennants and, come party time, it will ring to the sound of a Roooooo-da-ni-aaaaaa from another age. That was the era when Eddy ate up the asphalt, one victory after another, driven by the hunger, every day, to surpass himself. Behind him, more than a peloton, a legend.

Today we raise our glasses to this exceptional Brussels-raised man, but also to all those anonymous people who, every day, give the two-wheeler its nobility. They know that Brussels is not just the white collars of the Eurocrats. They have their Galibier. They also have their time trials and their nose on the handlebars. So, contrary to what you might think, the Tour is a great opportunity to stop for a moment in the village square to watch the world go by.

To go with this moment, let’s for once leave the water bottle in its holder and look for a guinguette that will serve one of our wines on a small tray (if the owner doesn’t know us yet, don’t hesitate to
give them our address). Brussels wines that have already done their Tour de France since they are the fruit of several grape varieties, coming from several regions of the Hexagon.

Gudule is happy to celebrate this moment, and from July 1st to the 7th inclusive, she is offering a 10% discount for the purchase of 3 bottles to people who come to our urban winery wearing a touch of yellow or who arrive on a bike. Vegetarians and cannibals welcome.

Find all the news of the big departure on the dedicated website: www.brusselsgranddepart.com/letour

word of the day: nose 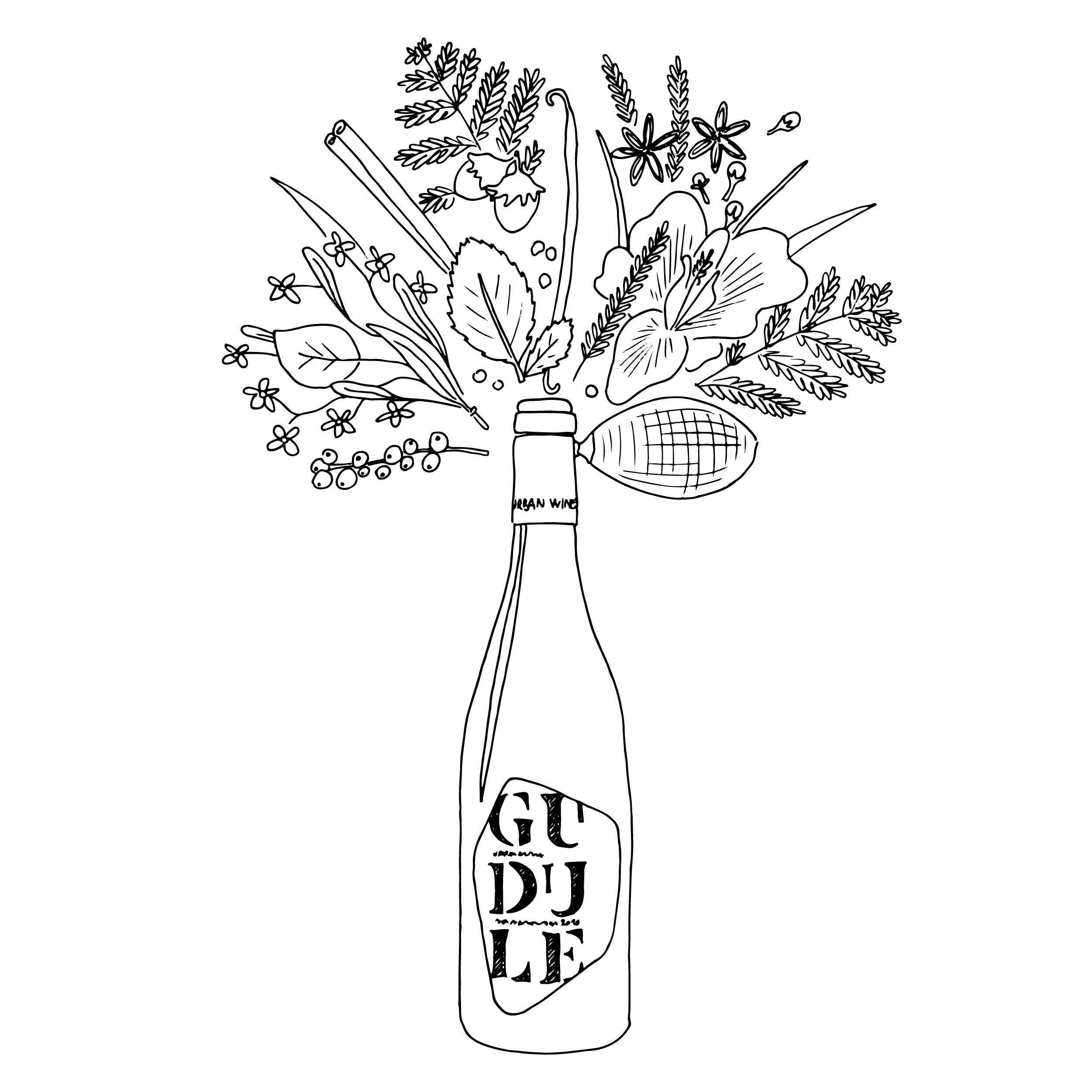 Olfactory appreciation explores a wine’s aromas, their intensity, their quality and their character. Within a wine you may detect vegetable, floral, animal or empyreumatic (smoky) notes. Experience Gudule’s aroma and see how it inspires your inner poet.

Gudule loves all kinds of music

How about you, do you prefer your music red, white or rosé? 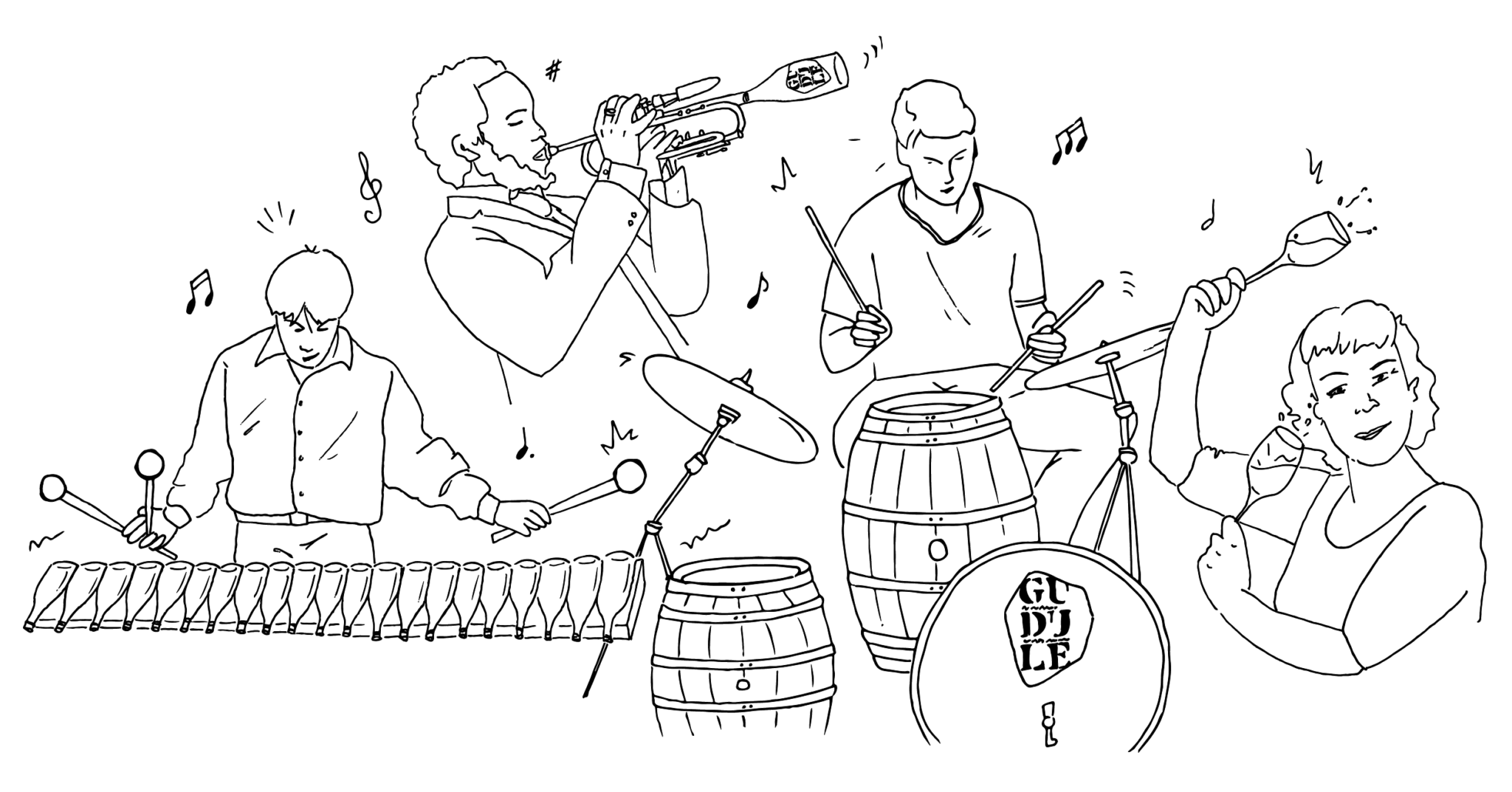 Wine and music have something in common: they bring people together. Just imagine what would happen if you combined the two. The result would be a unique multi-sensory experience: the perfect way to have a fantastic time together.

What wine goes with what music?

We don’t have any grand theories here where a particular genre is restricted to a particular vintage. The important thing is that you enjoy it. A wine’s notes, its strength and its balance are characteristics that find their echo in the sounds produced by your favourite orchestra or band. It’s a shared vocabulary that translates feelings whose expression can at times be complex. So the best thing is to try it for yourself.

Give your ears some taste buds of their own by pairing up one of our fine wines with your favourite tracks. Here are a few suggestions: “Retour du Marché”, with its blend of black Grenache and Cabernet Franc grapes, could be the perfect accompaniment to the song “Bruxelles” by Dick Annegarn, whereas Jacques Brel’s “Bruxelles” might be better suited to our “Après-midi au Parc” wine: those Cinsault and Syrah grapes are certainly there for a good reason. Is rock music more your style? “Temperplane” from the Belgian band Montevideo will do nicely during an “Afterwork en Terrasse” with colleagues. It’s yours to discover.

Making wine in town?
You have to drink it to believe it! 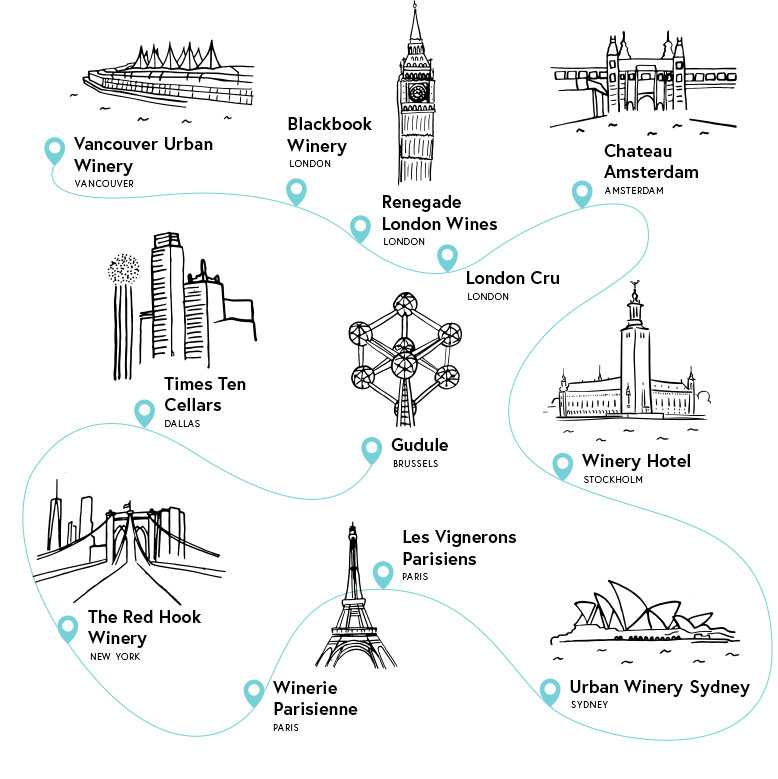 Rather than closed or elitist, it is an operation with a family feel whose founding principles are to make winemaking part of the city’s fabric, participate in the local economy, get closer to the consumer, take them on the adventure and finally (and first and foremost), make wine – even excellent wine.

Just like the cities where they are located, each winery tells a different story, offers a unique encounter and is the fulfilment of a dream. At Gudule, every vintage is the fruit of a careful assembly process that respects the passionate work of our wine-growing friends and the emotional Brussels terroir.

Indeed, we produce wines with a Brussels accent. Wines that accompany the emulation of the city and its melting pot of ideas. Five vintages to share around a table of good food or during a picnic in the heart of Brussels, an extraordinary, cosmopolitan and multicultural city echoed by our wines, which freely combine several grape varieties.

To learn more about Urban Wineries, read the excellent article from the Wine & Spirit Education Trust where you can discover some big names such as London Cru and Red Hook Winery in New York.

And to explore our cellar or simply uncork one of our bottles, follow this link.

We use cookies to ensure that we give you the best experience on our website. If you continue to use this site we will assume that you are happy with it.OkPrivacy policy